Great Success for the DBIS team! In the context of the BPM 2013 conference in Beijing, the Steering Committee of the

Peter Dadam for their paper

Evaluation of Correctness Criteria for Dynamic Workflow Changes presented at

The BPM Test of Time Award is given every two years. In 2013 the award was given to the above paper, which has been selected as the most influential one presented at BPM 2003 in Eindhoven and BPM 2004 in Potsdam. The decision was made by the Steering Committee of the BPM conference series and was based on the impact of the paper on the BPM field (both from a scientific and practical viewpoint), the number of citations received during the last 10 years (Google Scholar and Scopus), the technical quality, and the presentation. 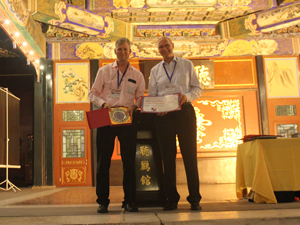 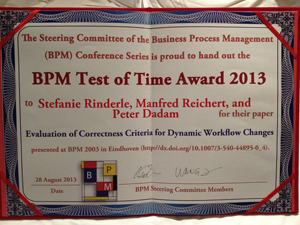 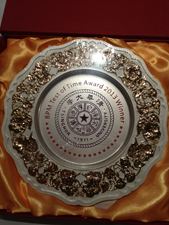 The DBIS team is pleased to have received this prestigious award, which constitutes another acknowledgement of the high impact and visibility of DBIS research. The award ceremony took place at the

BPM 2013 conference in Beijing. Peter Dadam participated at this ceremony and received the award from Wil van der Aalst. The laudation of the BPM steering committee motivating its decision can be downloaded

Background on the awarded DBIS paper

BPM 2003 paper compares actual approaches dealing with adaptive workflows using a set of fundamental criteria. The work focuses on correctness measures to decide whether or not a process instance can be smoothly migrated to a modified process model. Many authors published papers on workflow flexibility, which has been one of the hotspots in BPM research for more than a decade (see also

www.process-flexibility.com). However, most of the earlier approaches focused on a specific technique or problem rather than a comparative analysis and a comprehensive set of criteria. Yet, there are various notorious dynamic change problems that need to be considered urgently. As such, this paper was an important step towards a more mature treatment of the topic.

Today, the topic of flexibility and workflow change is still of the utmost relevance. Our BPM 2003 paper is one of the most cited BPM papers of its period. Moreover, the quality was already acknowledged in 2003 and, hence, we were invited for the special issue of Data & Knowledge Engineering based on BPM 2003. Also the extended journal paper (