Quantum computers, tap-proof data transfer or highly sensitive sensors. Quantum mechanical properties such as superposition and entanglement form the basis of many of tomorrow's technological systems.

In the interdisciplinary research focus of quantum information and technology, scientists at Ulm University investigate quantum physical phenomena in theory and through experimentation. The overall goal is to gain complete control over quantum systems. The work also revolves around quantum physical effects in condensed matter, in nanostructures and in biological systems. 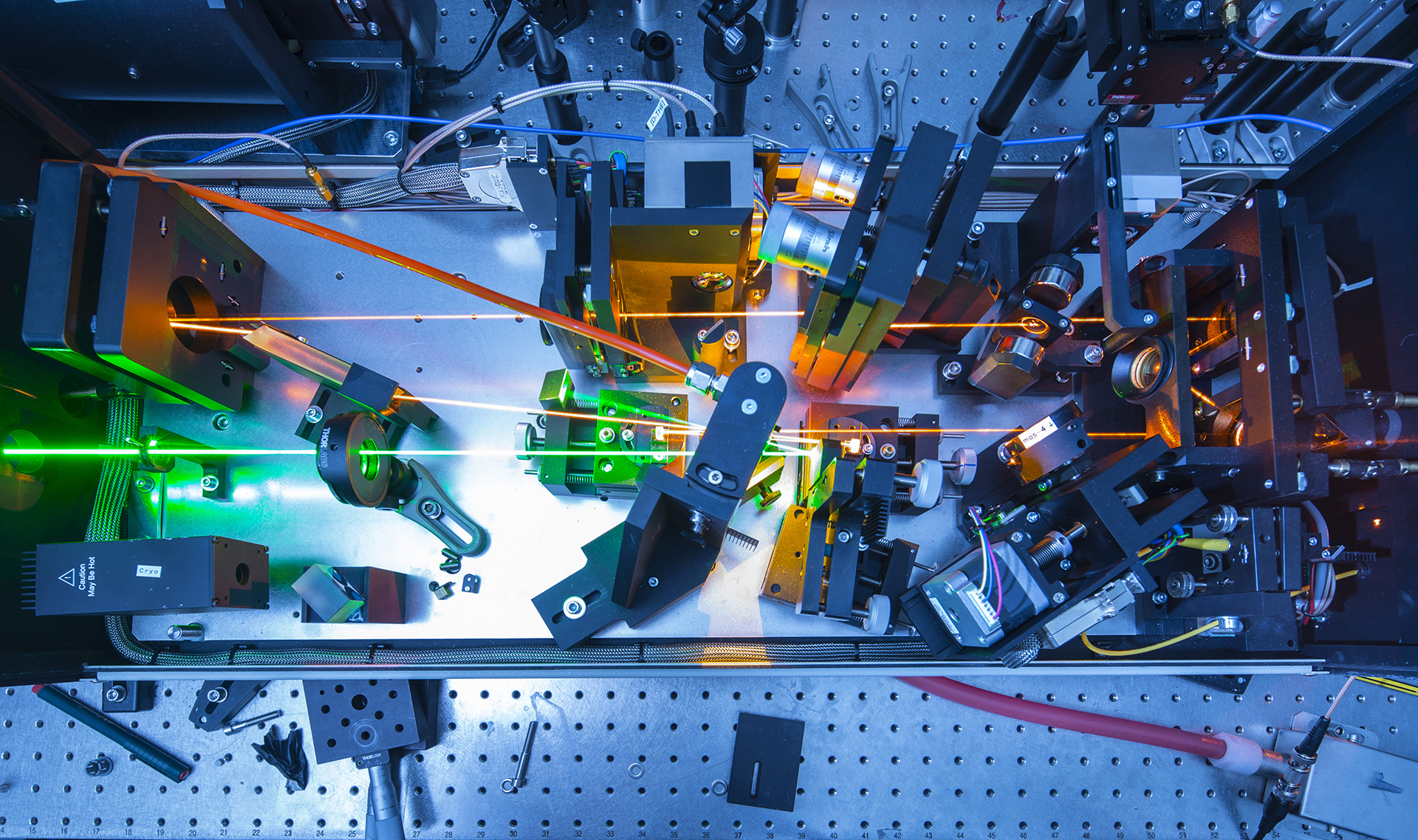 Beyond the boundaries of physics

These research activities are pooled at the Center for Integrated Quantum Science and Technology (IQST). In this unique collaboration, which is unique in this form in Germany, scientists from Ulm and Stuttgart increasingly push the boundaries of physics:  In IQST research projects, fexperts in physics, chemistry, mathematics and engineering work closely together in order to transfer excellent research results into technical applications.

The research on hybrid quantum systems bridges the gap between solid-state and atomic physics and electrical engineering. By combining the strengths of a variety of quantum mechanical systems, they can be utilised, for instance, for the safe transfer of information ('quantum cryptography') or the quantum computer.

Novel sensors that can be inserted into cells are an important goal of quantum research at Ulm University. To achieve this, scientists are focusing on the manipulation of individual atoms in diamonds. Substantially involved is Prof. Fedor Jelezko, one of the world's leading experts in controlling the smallest particles in solids – as demonstrated by the prestigious awards he has won.

In fact, a new research field has evolved in this area at Ulm University, which is being explored by the 'Quantum Devices and Biology' (BioQ) group: quantum biosciences. Researchers strive to understand quantum effects in biological systems. As part of this endeavour, they are developing sensor and imaging technologies that make visible the structures and functions of individual biomolecules under physiological conditions – with atomic resolution and down to the quantum level. Not only biomedical research and diagnostics could benefit from these developments, but also the pharmaceutical and the photovoltaic industries. Beyond that, the researchers also set out to explain a wide range of phenomena such as the human sense of smell, photosynthesis and the flight of birds.

In order to pave the way for such frontier research, physics professors Martin Plenio and Fedor Jelezko and the chemist Prof. Tanja Weil (now Director of the Max Planck Institute for Polymer Research) were awarded a Synergy Grant by the European Research Council (ERC) at the end of 2012. Worth 10.3 million euros, it is the European Union's most highly endowed research instrument. In 2019 the professors Martin Plenio, Fedor Jelezko and Jan Hendrik Ardenkjær-Larsen were awarded a second Synergy Grant and 9.4 million euros for six years. Their new project HyperQ focuses on the improvement of magnetic resonance imaging.

As a side-effect of their research, the group furthermore won the EU project HYPERDIAMOND (5 million euros in total): The researchers want to improve magnetic resonance imaging with quantum technology and hyperpolarised diamonds. While Professor Plenio is laying the theoretical foundations in a Reinhart Koselleck project, the transfer into applications in biomedicine is carried out by the specially founded start-up NVision.

As of late, the BioQ group is conducting research with more than 100 scientists under one roof. A Centre for Quantum Biosciences (ZQB) has been established at Ulm University with high-tech and unique laboratories tailored precisely to the researchers' needs. Furthermore, a new supermicroscope provides unexpected insights into the quantum world: Since the end of 2017, the scientists have at their disposal SALVE, the world’s only low-voltage transmission electron microscope with double aberration correction.

An ideal addition to the research in the Center for Integrated Quantum Science and Technology (IQST) are the activities in the new institute on the topic of quantum technologies in space applications (DLR Institut für Quantentechnologien; short: DLR-QT), which the German Aerospace Centre (Deutsches Zentrum für Luft- und Raumfahrt; DLR) is setting up in Ulm. The aim of the DLR-QT is to develop next-generation precision instruments that can be used for navigation, communication as well as Earth and weather observation in space.

Quantum technology can also help people on Earth with satellite-based navigation, because high-precision quantum clocks are much more powerful than conventional atomic clocks and enable much more precise positioning for GPS systems. Another promising area is quantum communication, in which novel encryption techniques are to be developed using quantum cryptography. These are far superior to conventional, mathematically-based algorithms for encrypting messages.

In close cooperation with industry and located in Baden-Württemberg, one of the leading locations in the aerospace industry, DLR-QT bridges the gap between basic research and application. The institute has an annual budget of around 11 million euros at its disposal for this purpose. The initiators of DLR-QT include Professor Wolfgang Schleich, Director of the Institute of Quantum Physics at Ulm University, and Professor Hansjörg Dittus, member of the DLR Executive Board.